I love tacos. Not a newsflash, for sure…but I’ll pretty much put anything in a taco. And yet, before I ate the Brussels sprouts tacos at my local Tacofino, I had never thought to put what is perhaps my favourite veggie into tacos.

My life has been changed.

I have kept the recipe pretty faithful to the original:

Then I added a few of my own touches, like smashed cumin-y white beans for extra protein and fibre so you’ll actually get full. Plus pickled jalapeños because pickles >>> regular garnish.

How to get crispy Brussels sprouts without deep frying

For these Brussels, all you need is a good nonstick pan with a lid and a resistance to fuss with them. By adding enough oil, and covering the Brussels sprouts, they caramelize and steam at the same time so you don’t end up with raw and burnt sprouts. Cuz that’s the worst.

My love of Brussels sprouts goes deep…I’ve been gobbling them up since I was a kid. See? Total food nerd since birth.

I know that not everyone loves ’em, but it’s usually because we’re subjected to overcooked, sulphurous mush masquerading as sprouts. Roasted or pan-fried, or even raw and shredded, they’re so delicious. Perhaps even…in a crispy Brussels sprouts taco? Hmm? Convinced yet?

They also come with a ton of nutritional benefits too, if that helps! 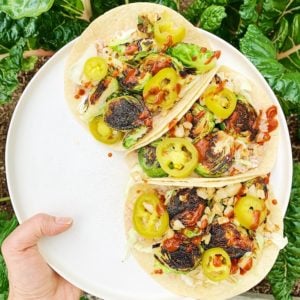 These crispy vegan Brussels sprouts tacos are super simple to make and come together in one pan. If you want a more filling meal, make the cumin-smashed white beans to add extra flavour and protein to make this easy plant-based meal even more satisfying.

I love serving these with halved sprouts, the way they did at the restaurant but if you like, try roughly chopping the sprouts after they’re cooked so they’re a bit easier to munch in the tacos.

This Stunning Holiday Cake Is For Peppermint Hot Chocolate Lovers

Move United Offered Over 2,200 Virtual Programs to Individuals with…

Adapting during Covid has demonstrated the power of sports to bring people with disabilities together, making us stronger mentally, physically and...

I Tried Future Fit App—And Fell Back in Love With Strength...