It’s the time of year when I get out my favorite crockpot recipes to get me through the busy fall season. With school and dance starting up for my girls along with trying to run a business and keep some sort of order in my house, I have very limited time to cook during the week.

This is when I depend on my trusty crockpot recipes.

With the cooler weather coming along, there’s nothing like a comforting bowl of chili or soup to enjoy on a chilly night. Well now, you can add stuffed peppers to that list too!

I will say I’ve made many delicious slow cooker recipes from this cookbook so I gave this one a try. By the way, if you’re looking for a slow cooker cookbook that has tried and tested recipes, I highly recommend this cookbook. It never fails me!

Anyway, I’ve been making these crockpot stuffed peppers ever since. Of course, I’ve learned some tips along the way and also put my own twist on them.

With that being said, I’m going to share my basic crockpot stuffed pepper recipe! This is the one I make most often but I’ll share some other variations (like this Italian Stuffed Pepper recipe) below.

Before I do that, let’s go over some questions I frequently see from readers…

Which are the best type of peppers to use for stuffed peppers?

You will want to use bell peppers for this recipe. It doesn’t really matter which color. I like to use a variety so it looks pretty but I tend to use red and green the most!

Honestly, any color will work fine.

Do you have to cook the meat before stuffing the bell peppers?

No, and that’s the beauty of this recipe!

I went back and forth with whether I should cook the meat first because I do prefer the taste ground beef gets from being browned in a pan. However, I wanted to keep this recipe easy and meal prep friendly.

So, I mix the raw ground beef in with other ingredients and then just stuff the peppers.

Should the peppers be cooked before stuffing?

Nope. The peppers will fully cook in the slow cooker.

How long do the stuffed peppers take to cook in the crockpot?

The stuffed peppers I cook in the crockpot cook perfectly on low for 6 hours. I’ve also cooked them on high for 3 hours.

It’s going to depend on the size of your peppers but a good rule of thumb for cooking stuffed peppers in the crockpot is 6-7 hours on low or 3-4 hours on high. Unfortunately, this recipe is not one you can cook for 10 – 11 hours on low. You’ll end up with mushy peppers.

Can I use ground turkey?

You sure can! I’ve used ground turkey many times in this recipe. The cooking time is about the same.

My advice is to check the internal temperature. The turkey should read 165 degrees to be considered fully cooked.

Which side dishes pair the best with stuffed peppers?

Stuffed peppers are really like the perfect portioned-controlled meal that meets all the craving requirements. But, if you must have a side dish, these would work really well:

Here is a list of supplies you will need to make these stuffed peppers in the crockpot.

Now, let’s get this recipe. Here is a list of ingredients you will need to make these peppers.

Note: This recipe is very versatile so you can switch up based on the ingredients you have on hand.

How To Make Stuffed Peppers

Cut off the tops of the peppers and remove the ribs and seeds from inside and discard. Set the cleaned peppers aside. 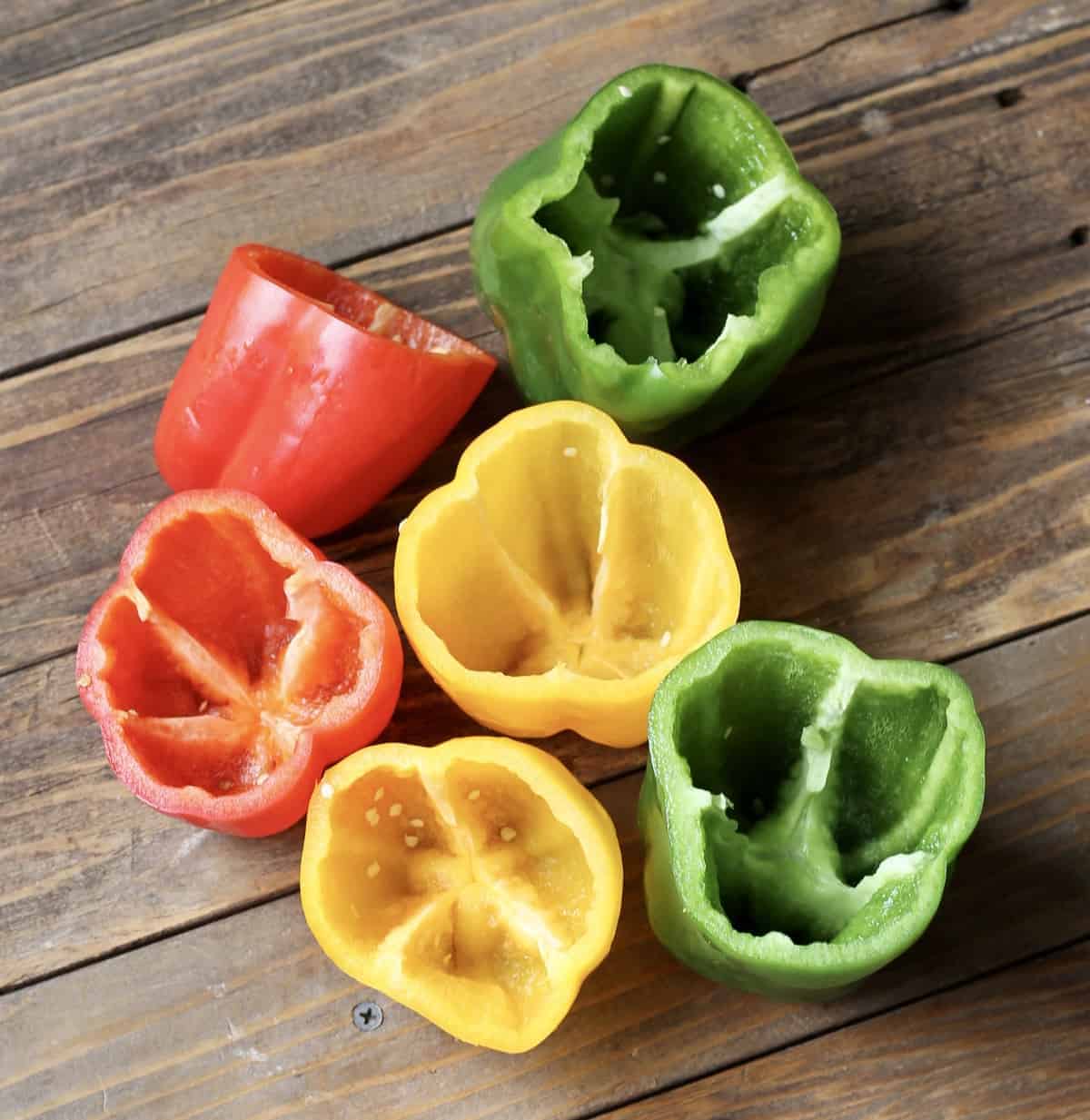 In a medium microwave-safe bowl mix the onions, garlic, and olive oil together. Place into the microwave and heat for 5 minutes on high. Be careful when you take this out of the microwave because the bowl will be hot. Set aside to cool for 3-5 minutes.

This little trick is to help bloom the onions and garlic which gives them more flavor. If you were to just put them in raw, they would essentially steam and not have any flavor. 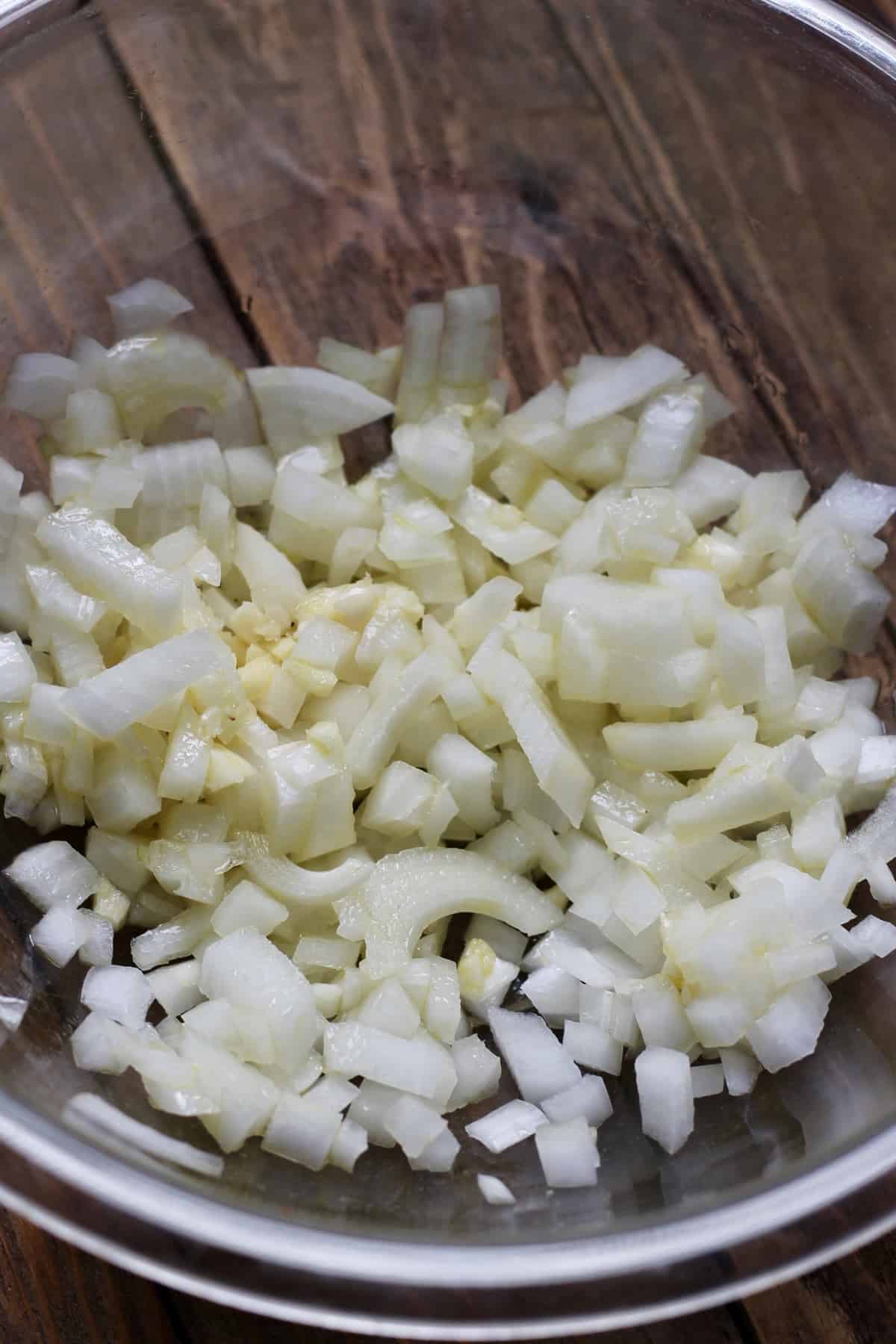 In a large bowl, mash together the bread and milk until a paste forms. Then, add in the ground beef, parmesan cheese, brown rice, shredded cheese, spaghetti sauce, and the mixture of onion and garlic. Mix everything together until all of the ingredients are evenly distributed throughout the ground beef.

Spread the remaining sauce onto the bottom of the slow cooker insert.

Stuff each pepper with the ground beef mixture and then place it into the slow cooker insert standing up on top of the sauce. 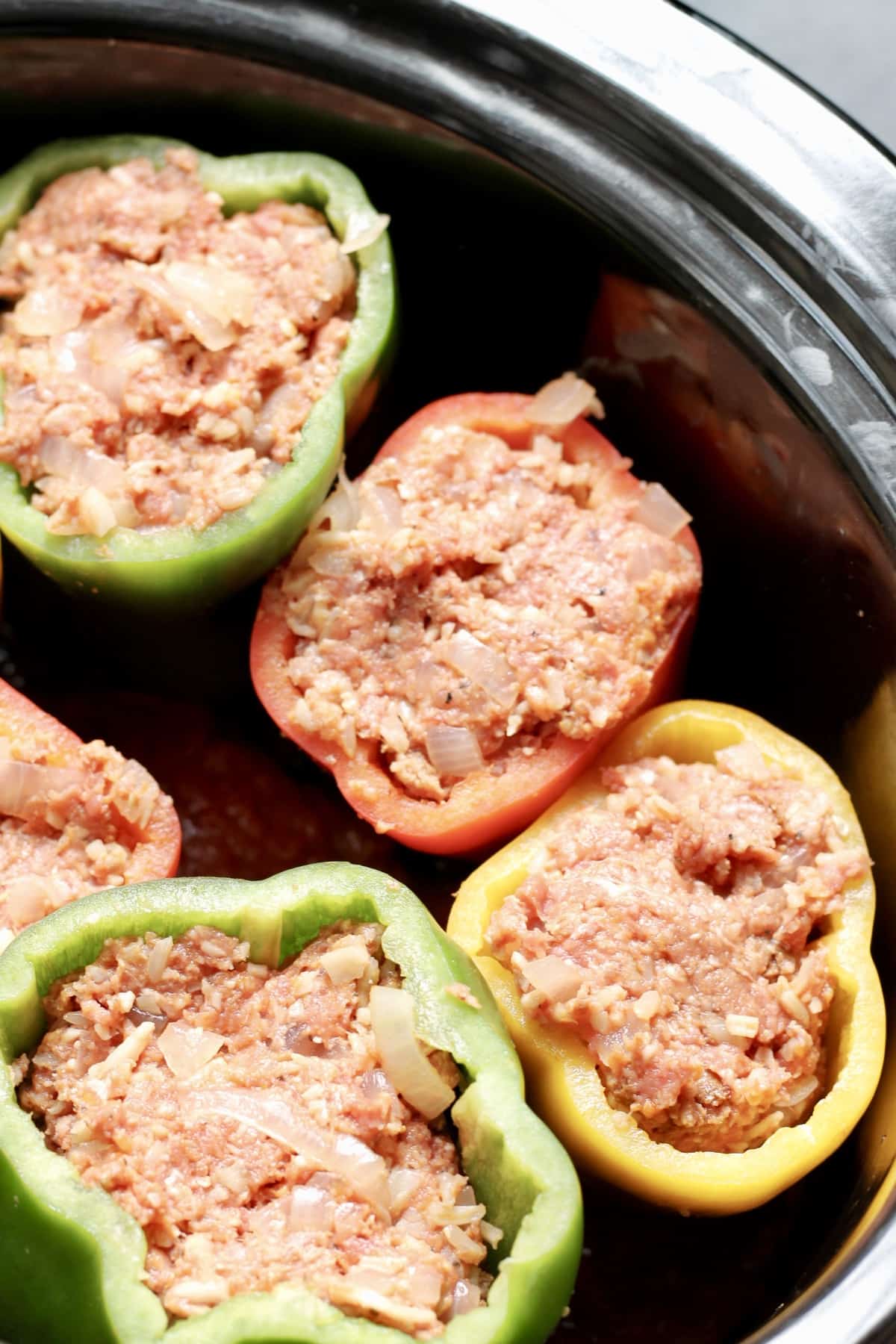 Put the lid on and set the slow cooker to cook on low for 4-6 hours. The ground beef should be cooked thoroughly. Again, if you’re unsure then use a thermometer. My peppers were fully cooked at 6 hours.

When you have about 5 minutes left, add the remaining shredded cheese to the peppers and place the lid back on. Then, serve after the cheese has melted!

Note: To warm up cook stuffed peppers just put in the microwave 2-3 minutes or until heated through. 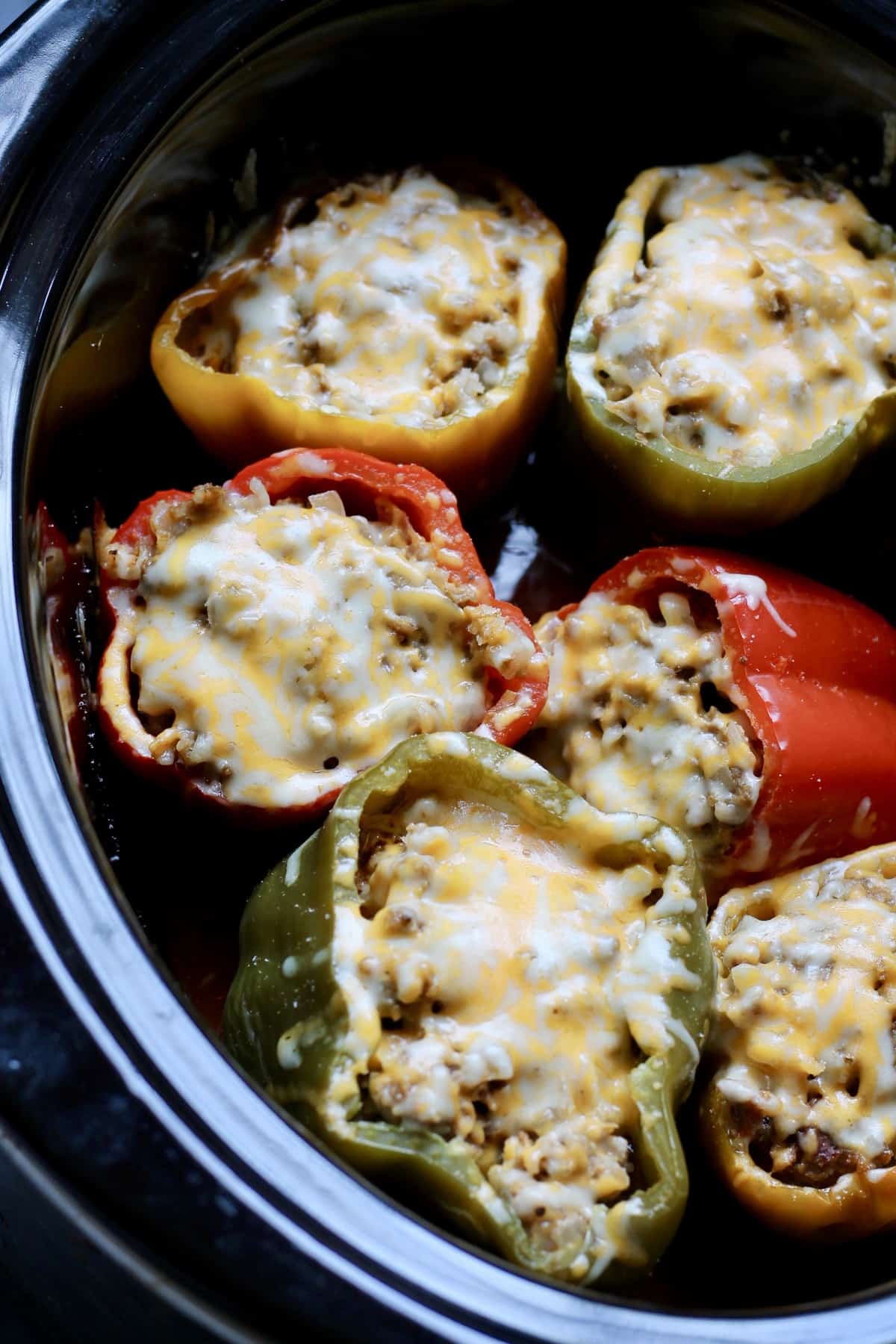 If you loved this recipe for crockpot stuffed peppers, take a look at some of these other slow cooker recipes to add to your recipe book!

These stuffed bell peppers are the perfect thing to put together for a healthy dinner. Simply prep the ingredients and let your crockpot do all the work!

Are you ready to learn how to meal prep? Awesome! Sign up now for a free 7-day Getting Started Meal Prep email series that I created exclusively for email subscribers! That’s you. I will teach you my favorite meal prep methods and provide lots of delicious easy recipes to get you started with weekly meal prep. You got this, I can help!

6 Ways to Make Your Chicken Tastier

“With many residents currently rediscovering their at-home fitness equipment, we’re ready to help fellow Angelenos get back up and running with...

Replace Your Cup of Coffee With a Healthier Alternative, Hydralyte +…