We must thank Conrad for his patience, as MAN v FAT has been sitting on his story for so long now that some of the above information is almost certainly out of date. For example, when last we spoke, he informed us of his intention to keep cutting his weight, with a target of 200lbs in mind. Hopefully, Conrad will be on hand to give us an update of his current weight on Talk, along with a possible confirmation that he is now aged 34 and living on Moon Base 5. That’s not on the moon, it’s just the name of a new housing development in Portland. 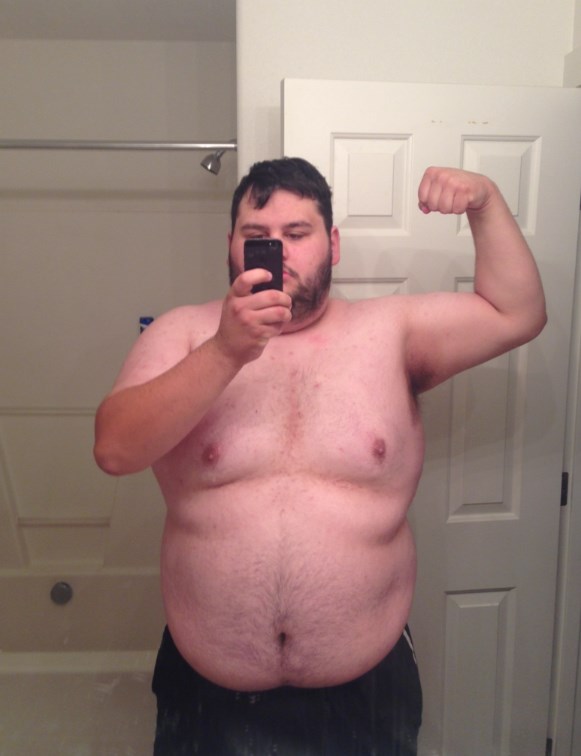 Conrad, Portland is known as the capital of hipster culture; did you employ a suitably new age approach to your weight loss?

For the first year I did keto. My trainer and friend Kenny Nguyen wrote me a breakdown of what I needed to eat calorie, protein, and fat wise. I went to the gym every single day. I weighed every meal, counted every calorie. If I wasn’t 1,000% sure what was in the food, I didn’t eat it. I tracked everything, I didn’t have any cheat days; as my trainer always said: “The first 23 years was your cheat day.” I was strict and never cheated, because I knew that would make me weaker.

Did you get any of the side effects that are supposed to go along with keto, such as “metal breath”?

I did get metal breath slightly, but I always carried around sugar-free mints or mouth wash to cover it up. I was also tired a lot, especially near the end. I’m not sure if that was the calorie-cutting or the lack of carbs though. 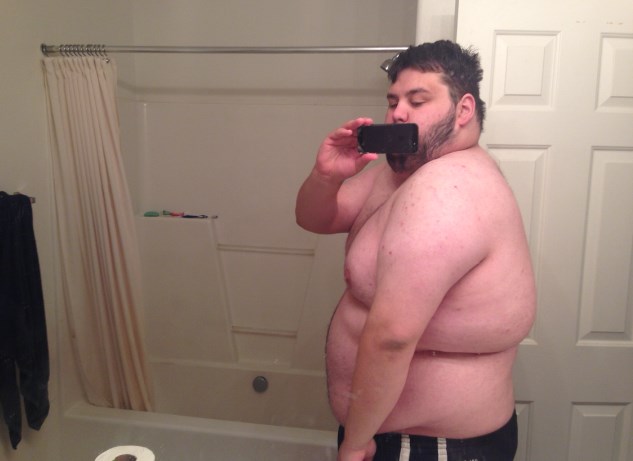 Could you give us a typical example of what you ate over the course of an average day?

I literally ate the same things every day, basically, for a year. I’m serious. I ate eggs, salads, chicken, and bacon every day. It made things simple to keep track of and easy to make. I needed to teach my body that food was a tool and not a treat.

We really admire your approach with the food – how did you deal with the boredom of eating the same things over and over? Do you think that this would be sustainable long-term or would you add different things back in? Was there anything you missed?

I would treat myself with Buffalo Wild Wings, or a salad from Chipotle every once in a while but besides that I just dealt with the boredom of eating the same thing. And in my mind it wasn’t a “long term” thing, it was doing and eating whatever I need to achieve my goal – if it took five years then I would have eaten the same thing for five years. The only time I added things back in was when I started to bulk and I was eating carbs again. And I only started to miss carbs when I knew I was close to my goal, besides that I just missed not being tired.

Why did you get to the position where you needed to lose that weight?

When I was a kid my father owned a deli and I ate whatever and whenever I wanted. When I entered foster care at age 12 I lost a lot of weight, because the foster parents I had watched my diet and made me go outside. I always was an athletic kid, even when I was fat, but I just ate so bad. I left foster care at age 13 and moved back in with my dad, then I just gained crazy weight again. After high school I worked for Pizza Hut and that’s when I hit my biggest number, 380lbs. It was a fat man’s dream, free pizza 24/7.

What made you decide to change?

Two things made me want to change. First was when I attended a pearl jam concert at age 22 or 23 and I couldn’t fit into the chair at the stadium. It was one of the most embarrassing moments of my life. Second, I wanted to start getting laid, and hot chicks don’t like fat guys. It’s hard to hear but I realized it and wanted to change that. I was getting denied by women at every turn, and as much as we want to think it, personality doesn’t go all the way. LOOKS DO MATTER. I was looked at for being so big, I hated standing near children because I feared they were going to call me fat because as we know, kids have no filter.

Did you take inspiration from anyone in particular?

One of my friends got into lifting and got went from 5’3″, 90lbs of skin and bone to 134lbs of pure muscle, no joke. And I was ‘mirin’ hard. After a few years of see him change and basically look like a different person I got inspired, I wanted to make the same change. And with his help, and the help of my trainer Kenny Nguyen, I did. 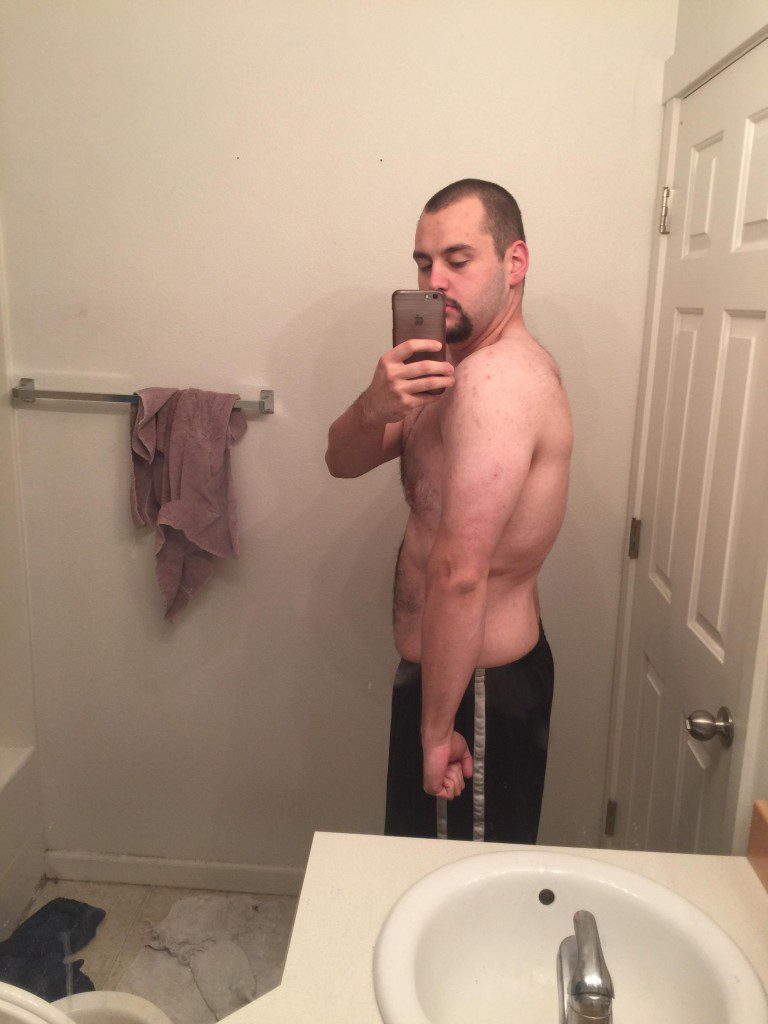 Every time someone compliments me on working out or losing weight I bring Kenny up. I for sure couldn’t have done any of this without him pushing me. If he wasn’t here to help me, I’d probably be 400+lbs by now. Many people try to give me advice or suggestions, but if Kenny doesn’t give the approval then I don’t do it. I try to tell him every so often how much he’s helped me but it’s difficult because we’re guys and have known each other for so long.

I have to give thanks to my older brother Andrew for making me dinners and weighing food for me when I didn’t have time or energy, and thanks to my friend Marc, who came out as a homosexual around the time when I started lifting. His courage really helped me believe I could be a better person.

How was the journey? Straight-forward or were there a few plateaus along the way?
I was losing weight at a solid rate throughout my diet. During keto it was from 2-5lbs a week. After I hit 217lbs the first time, I did a slow bulk of about 2lbs a week. Once I hit 240ish I decided to cut again and now I’m losing about 2lbs a week on a strict Marco and calorie counting diet.

What surprised you about losing weight?

How much life changes. And for me it took under two years to change my life 180 degrees. Sometimes it’ll take longer, or shorter for some people but no matter what I suggest everyone does it. 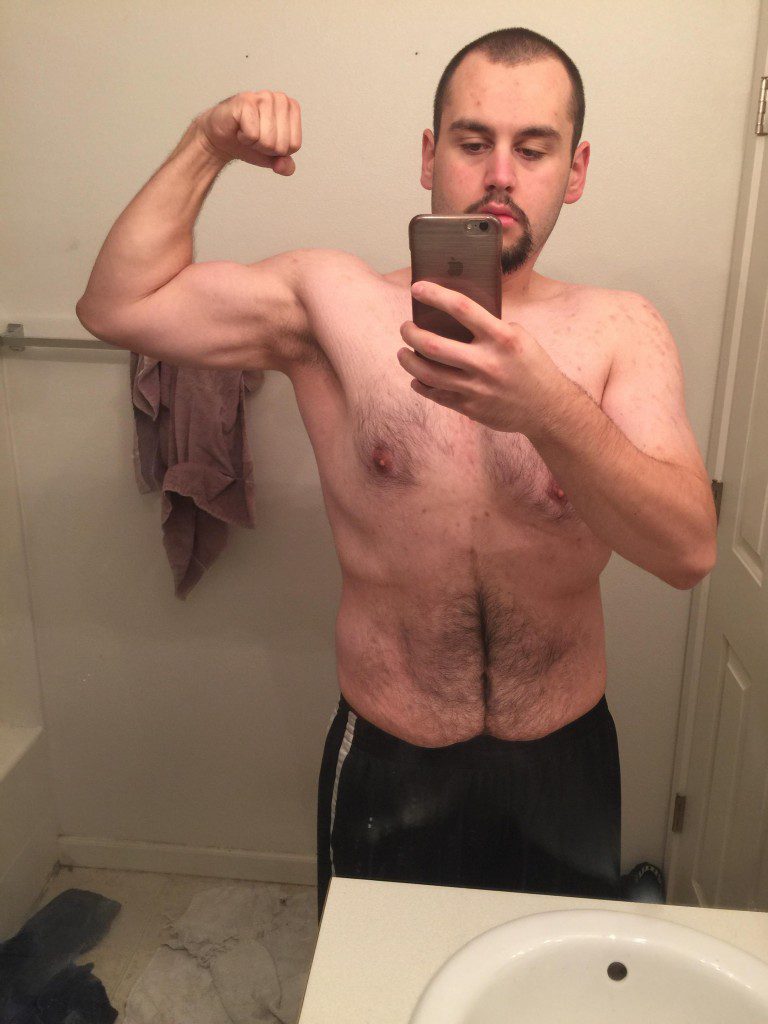 How has life changed now you’ve lost the weight?

I have a ton more confidence compared to before. I’m eager to do more, go outside, play sports, talk to people. I feel more relaxed around woman and I also can walk up stairs without feeling like death is on my back.

You’re mayor of Portland for the day, what one law do you bring in to help others who are obese?

This is going to sound harsh, but anyone over a certain body fat percentage is required to go the the gym and eat right.

What three things do other fat men need to know about losing weight?

As with all our Amazing Losers and their weight loss before and after stories, Conrad is on Talk, where he is happy to chat through anything you’d like to know. It’s all free and it makes up the world’s biggest social network of men who want to get and give support around weight loss.

How To Create An Irresistible Body Care Ritual, With One Surprising Ingredient

Where To Travel To Find Love This Year, According To Your Birth Chart

VIDEO: How to make a creamy plant based mushroom zucchini pasta

Dear parents, you need practice the self care you want your...