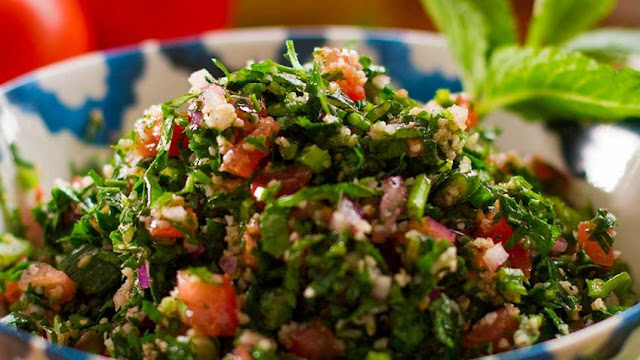 Isn’t it great when something taste so great but it’s equally as good for you? This Lebanese or Arabic salad does just that, a super tasty crisp salad, that I would consider a super food. It’s traditionally served as part of a mezze in the Middle Eastern Countries but I consider it mainly Lebanese. I’ve been to Lebanon and it was on every single table I sat at. It has become a popular salad across the world due to it’s simplicity, delicious taste and health properties. Use it as a side dish for your meats, great for BBQs or simply as a meal with Lebanese bread. I used spring onion (scallion) and Ras el hanout spice which are both optional but I feel add an extra zing. Make sure you wash and dry your greens thoroughly, use a salad spinner and kitchen towels to dry. See my little tips below and watch the video for clear instructions. Enjoy taboule (tabbouleh).

Fist soak the Bulghur with half cup of boiling water and leave it to rest for 20 minutes.

Chop the parsley medium fine, and add to a large mixing bowl.

Remove the core (eyes) of the tomatoes and dice into cubes. Add to mixing bowl

Chop the red onion and add to mixing bowl.

Pluck the mint leaves away from the stems, throw out the stems and roll the leaves tightly like a cigar. Using a knife, cut or shred finely. Add to mixing bowl.

Fluff up the Bulghur and if cool, add to the mixing bowl along with the ras el hanout spice, salt and pepper.

Juice one whole lemon and add to salad along with olive oil, mix well and serve immediately or refrigerate.

– Garnish with lettuce or mint leaves.

– You can also soak the Bulghur in lemon juice for a better flavour.

– Placing the chopped tomatoes in a sieve with a sprinkle of salt and allowing them to drip, will remove excess moisture.

– You can also add fresh cucumber for extra crunch.

‘We are exhausted’: 75 US doctors stage protest against unvaccinated patients