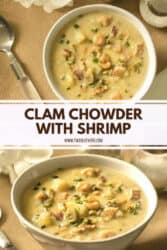 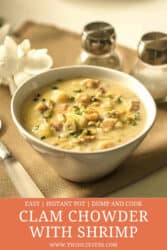 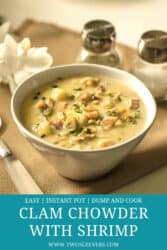 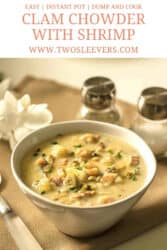 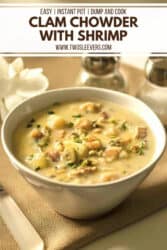 Creamy potatoes and savory clams, nestled together in a rich broth make this Instant Pot Clam Chowder with Shrimp a truly comforting dish, filling you with warmth and deliciousness. Make this quickly and easily right in your Instant Pot!

What Makes This Instant Pot Clam Chowder So Good

There truly are few things as comforting as a nice hot bowl of chowder. The only thing that could possibly make it better is if there was an easier and faster way to make it. And that’s exactly what I’ve accomplished with this Instant Pot Clam Chowder recipe.

I’ve taken all the usual preparation and cooking steps for making clam chowder and condensed it enough to make this Easy Clam Chowder as painless and hands-off as I can possibly make it. But just because this is simple doesn’t mean it tastes that way. the Instant Pot infuses this dish with so much flavor that you’d have no idea it was a dump and cook recipe.

And I know, this Instant Pot Clam Chowder recipe isn’t particularly low in carbs, but what it lacks in keto friendliness it makes up for in absolute deliciousness. Regrettably not everything successfully translates into a low carb dish. However, if you’re looking for a seafood dish that’s not so carb-heavy you should check out my Cioppino Seafood Stew.

WHY ADD SHRIMP TO THE CLAM CHOWDER WITH SHRIMP?

I mean, the short answer is that it’s delicious. But I will tell you what gave me the idea. I try not to ramble on about personal things on the blog, but I like this story 🙂

When my husband Roger and I first met, we went to Oregon Beach. It was an absolutely magical time in a beautiful place.

Out on the beach was a little shack that served something called slumgullion. I had no idea what it was–which of course meant I had to try it because I love trying new things.

Roger said it was one of his favorites, so we ordered it. And then…

Out comes this HUGE sourdough boule, filled with clam chowder–sprinkled with perfect, tiny, pink shrimp on top. You take a spoon, you mix it all up, and you have at it.

So I’ve been wanting to make an Instant Pot Clam Chowder with Shrimp for ages. The only thing is, I can’t be bothered with fiddly recipes where you brown the bacon, cook the potatoes, then you add this or that… I need one pot, pour and cook recipes so that I can finish cooking without getting distracted by a shiny object.

So I finally got around to it, and here we are.

What Is A Chowder?

A chowder is a type of soup that typically has a milk or cream base and is thickened with either a roux or crackers. It’s typically either made with seafood or veggies, and this Instant Pot Clam Chowder with Shrimp is easily one of my favorite chowders out there! However, I’m also quite partial to Corn Chowder.

So if you love clam chowder like I do but don’t love how much effort is involved in making it traditionally, this Instant Pot Clam Chowder is sure to make you one happy cook. Make sure to share this recipe with your friends on Pinterest and Facebook so they can enjoy it as well! 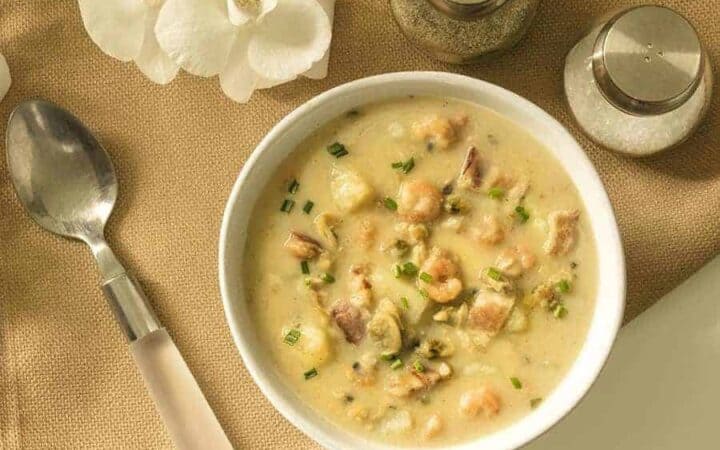 There are few things as comforting as a nice hot bowl of clam chowder. Creamy potatoes and savory clams, nestled together in a rich broth make this a truly comforting dish, filling you with warmth and deliciousness.

Rev. Suzie DeVaughn, LMSW’s book “Mastering Self Care” is an…

The holidays will look different this year: Here are 4 ways...

HOUSTON (PRWEB) December 17, 2020 For many, this year’s holiday season will look a lot different from years past. A recent...

What’s in my Pantry?

Target ALS and Spartan Launch “The Toughest Challenge For The Hardest…