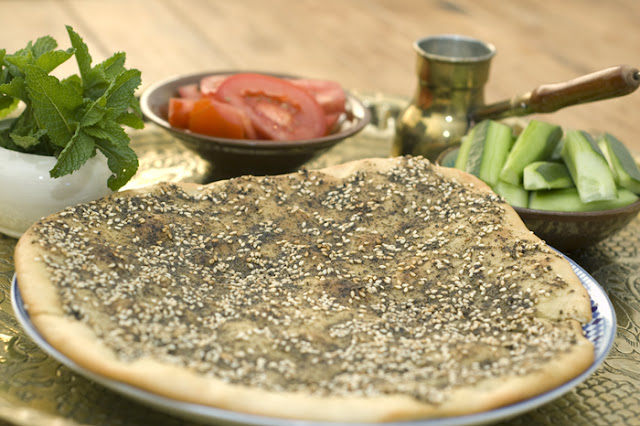 It is difficult to think of a Lebanese breakfast that is more popular or loved than the manoosheh. Round flat discs of bread covered with zaatar (thyme, sumac and sesame seeds) mixed with olive oil and baked in the oven or on top of a saj. Manakish (مناقيش), the plural of manoosheh (منقوشه), are so prevalent in the Lebanese culture that every borough or village has one or more dedicated bakeries. They are also entrenched into our pop culture and are symbolic as being the food of the poor (along with falafel). The word itself means decorated or stamped, referring to how the dough is flattened using the tips of the fingers which leave a stamp-like decorative pattern. The manoosheh may be famous for being the Lebanese pizza, but despite its fame, there is little available literature that points in the direction of its origin, and nothing that gives us an idea of how long it has been present in Lebanese homes. Chef Ramzi, the Lebanese celebrity chef has a brief paragraph on the subject in his book “From the Heritage of Lebanon” (من تراث لبنان). The manoosheh, he suggests, is a recent addition to the Lebanese diet:

The manoosheh has only recently appeared in Lebanon, evolving to this day to become Lebanon’s most demanded breakfast. The main reasons for that are its ease and speed of preparation, its low price tag, it being tasty and its readiness to marry with a multitude of ingredients to produce a world of flavour… Each house wife would, upon returning from the fields, prepare a zaatar mix and distribute it on the saj loaves… All these variations fall under the category of manakish. This is considered a good example of the evolution of the Lebanese traditional village cuisine, in that it aligns itself to the needs and requirements of the modern consumer and adapting to them.

Chef Ramzi – From the Heritage of Lebanon 2002

5 cups strong pizza flour (if you can, otherwise, all purpose white flour would do)

1/2 cup Zaatar mix (buy it from your Middle-Eastern suppliers) adding enough olive oil to make a slightly runny consistency. If it doesn’t have toasted sesame seeds, add them.

In a large bowl, Mix all ingredients except for the water. Incorporate well. Make a well in the center and add the water. Knead the dough. It will be much stickier and softer than pizza dough, but it needs to hold together. If it doesn’t, keep kneading until it does. Keep aside to rise for an hour, covered with a wet cloth.

Heat the oven up to 220 C. Take some dough and spread it on a tray, using the tips of your fingers until it is the thickness of thin crust pizza. Top with the zaatar mix, again using your fingers to spread. Put the manoosheh in the oven for around 15 minutes. Remove when the bottom has cooked and become nice and golden.

Miami Skin Spa is a Brickell-based Medical Spa that offers the latest in Body Sculpting and Skin Rejuvenation services with our award-winning...