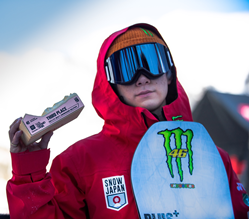 Sanctioned by the International Ski Federation (FIS), the U.S. Grand Prix marks the official start of the 2021/22 FIS Snowboard Halfpipe World Cup season. Contested at Copper Mountain Resort for the seventh time, the event drew an international field of snowboarders and freeski athletes for a weekend of competitions. At over 22 feet in height and 600 feet in length, the Copper Mountain superpipe is the only of its kind currently in operation in North America and provided a world-class backdrop for elite riders in the discipline.

In Saturday’s Men’s Snowboard Halfpipe final, the ten qualified riders hailed from only three countries: Japan, Switzerland, and the United States. Winners were determined based on their single best run out of three attempts.

As the final session got underway under blue skies, Monster Energy’s Yuto Totsuka from Yokohama, Japan, came in as a podium favorite after a dominant 2020/21 season. But on his first attempt, the 20-year-old reigning Men’s Snowboard Halfpipe World Champion was having difficulty putting a full run together.

On his third and final attempt, Totsuka tried to up the difficulty and elevation of his aerials but lost the handle on landing a backside 1260 halfway through his run. With fellow Japanese rider Ruka Hirano claiming the top spot, Totsuka finished in third place on the strength of his second run.

Based in Corona, California, Monster Energy is the leading marketer of energy drinks and alternative beverages. Refusing to acknowledge the traditional, Monster Energy supports the scene and sport. Whether motocross, off-road, NASCAR, MMA, BMX, surf, snowboard, ski, skateboard, or the rock and roll lifestyle, Monster Energy is a brand that believes in authenticity and the core of what its sports, athletes and musicians represent. More than a drink, it’s the way of life lived by athletes, sports, bands, believers and fans. See more about Monster Energy including all of its drinks at http://www.monsterenergy.com.

What Whale Watching Can Teach Us About Life

Researchers reveal the key to turning a bad mood around, in new study

Who doesn’t love a good protein bar? They’re among the most tasty, filling, and convenient healthy snack ideas you can enjoy, whether you prefer...

How to support your food nutrient intake with supplementation

What Whale Watching Can Teach Us About Life

Music Industry Pros Launch We Are All Music Foundation (WAAM) to…