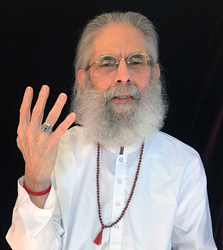 “When you coordinate all Four Functions of the Mind, the Conscience can reliably reflect your own Super Conscious Wisdom to resolve all conflicts and suffering.” – Leonard Perlmutter (Ram Lev)

According to Leonard Perlmutter, author of the new book, YOUR CONSCIENCE, humanity possesses the innate creative potential to resolve all political, social, racial and economic conflicts and suffering. And in an excerpt from his book in the November, 2021 issue of Transformation the Journal of Yoga Science as Holistic Mind/Body Medicine, Perlmutter explains in precise, understandable detail that by coordinating the Four Functions of the Mind and using the Conscience to access Super Conscious Wisdom, every human being can solve all of life’s challenges.

But why should you care? Why is this book different? And why is an understanding of the mind, and the role of the Conscience, so critically important? Physicist Albert Einstein made it perfectly clear when he said, “Problems cannot be solved on the level at which they appear. They must be solved on a higher level.” Armed with that hypothesis since 1977, Leonard Perlmutter and his wife Jenness have committed themselves, for 44 years, to performing an ongoing series of scientific experiments. Their purpose has been to transform the inherent, debilitating energy of stress, fear, anger and greed into reserves of healing energy, will power and creativity. Many of their results are presented in the book, YOUR CONSCIENCE.

This short, profound book can transform lives. It offers simple tools to access our unlimited wisdom and creativity, tools we never learned in any level of our schooling. Imagine the potential for renewal if an entire generation gained the confidence to know what’s to be done and what’s not to be done in every moment, no matter what the challenge. And without question, as Leonard Perlmutter reminds us in YOUR CONSCIENCE, “We have many challenges––both personal and global. These include: Abortion, Addiction, Aging, Anger, Anxiety, Bullying, Burnout, Civil Rights, Climate, Change, Death, Depression, Education, Family, Fear, Food, Government, Greed, Gun Control, Health, Immigration, LGBTQIA, Marriage, Misogyny, Money, Moral Decline, Non-Truth, Parenting, Politics, Pollution, Poverty, Racism, Self-Preservation, Sex, Sleep, Stress, Terrorism, and Violence.”

Perlmutter concludes that, “The freedom to skillfully resolve such conflicts and suffering is the real and practical gift that comes from coordinating the Four Functions of the Mind. Then, in the absence of dissension from the Ego, Senses and Unconscious, the Conscience is free to guide each of us to realize the brilliance of confidence and imperishable comfort we all long for.”

YOUR CONSCIENCE can be adapted for students in middle school through advanced graduate degrees, as well as for adult education programs in community centers, cultural institutions, places of worship, and other educational venues. The book has been endorsed by educator Tara Brach, Dean Ornish MD, Bernie Siegel MD, and others.

Author:
Leonard Perlmutter (Ram Lev) is founder of the American Meditation Institute and originator of National Conscience Month. Mr. Perlmutter’s first book, The Heart and Science of Yoga® was endorsed by Dean Ornish MD, Dr. Oz, and Bernie Siegel MD. Over the past 26 years, he has served on the faculties of the New England Institute of Ayurvedic Medicine in Boston, Massachusetts and the International Himalayan Yoga Teachers Association in Calgary, Canada. He has taught workshops on the benefits of the conscience, meditation and Yoga Science at the M.D. Anderson Cancer Center, Kaiser Permanente, numerous medical schools, The New York Times forum on Yoga, and the U.S. Military Academy at West Point Association of Graduates. Since 2009, Leonard’s Foundation Course on Yoga Science has been certified for continuing medical education credits by the American Medical Association and the American Nurses Association.

Is a health tax for the unvaccinated on the cards?

How to bring mindfulness into your workplace 2022

Should I get a prenup if I’m not cashed up?

How To Choose An Air Fryer – Picking The Right Air...

12 Grocery Delivery Services That Will Bring Fresh Food Right to...