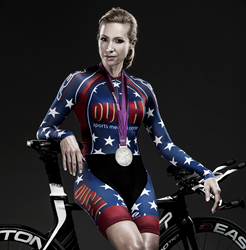 As an organization that promises in its bylaws to protect and promote its athletes’ wellbeing and champion the integrity of sport, the USOPC has failed yet again to do what’s right,” said Dotsie Bausch, Olympic silver medalist.

The United States Olympic & Paralympic Committee (USOPC) is being called to task by Team USA silver medalist Dotsie Bausch in an open letter for failing to take seriously the health concerns raised by nine Team USA athletes. The letter was printed as a full-page ad on Thursday, February 4, in three daily newspapers where Olympic facilities are located (including the USOPC’s Colorado Springs headquarters). Nonprofit Switch4Good, which champions a dairy-free lifestyle, applauds the effort.

“As an organization that promises in its bylaws to protect and promote its athletes’ wellbeing and champion the integrity of sport, the USOPC has failed yet again to do what’s right,” said Dotsie Bausch, Olympic silver medalist. “The promotion of unhealthy cow’s milk to Team USA athletes and to the public is unacceptable and another example of the USOPC’s willful disregard for the wellbeing of those it’s entrusted to protect.

In 1980, the U.S. Olympic committee allowed tobacco as a sponsor. Now it’s big dairy. Following are several, science-based reasons dairy is unhealthy. The USOPC should know better. Many athletes certainly do.

The Science About Cow’s Milk:

○ Increases mucus production in the gut and respiratory tract.

● Cow’s Milk is Unhealthy. Problems from lactose intolerance: Globally, 65 percent of the human population is naturally lactose intolerant. Individuals who cannot digest cow’s milk suffer from a range of mild to severe symptoms if they consume dairy products. These symptoms include bloating, gas, stomach pain, diarrhea, and other gastrointestinal issues, and typically occur within 30 minutes to two hours of consuming dairy. There is no cure for lactose intolerance, and symptoms often increase in severity as one ages due to the decreased activity of the lactase enzyme.

Breast cancer: Mounting evidence links dairy to breast cancer. A 2020 study added to the growing body of evidence linking cow’s milk with hormone-dependent cancer – women who consumed three or more servings of dairy a day increased their relative risk of breast cancer by upwards of 80 percent.

Trans & saturated fats: Dairy represents the single largest source of artery-clogging trans and saturated fats in the average American’s diet. It is not a healthy food for anyone – intolerant or otherwise.

Simply unnecessary: In February 2020, Harvard researchers Walter Willet and David Ludwig published a comprehensive review in the New England Journal of Medicine clearly stating that milk is not only unnecessary, but potentially harmful to human health.

Several health problems associated with dairy: All dairy – even the “low-fat, no added hormones” variety so heavily recommended by the guidelines – contains 15 bovine hormones that can negatively impact one’s health. Even for the minority of the global population that is not lactose intolerant, dairy can still cause bloating, respiratory issues, and chronic inflammation over time.

Dotsie Bausch is an Olympic silver medalist, activist, speaker, and nonprofit founder. After recovering from a life-threatening eating disorder, she found her love and talent for cycling, which led to a 14-year professional career concluding with a silver medal at the 2012 Olympics. She stars in the 2018 film “The Game Changers,” is featured in the Netflix documentary “Personal Gold,” and gave a TEDx Talk titled Olympic Level Compassion.

‘Bonking’ when you run? Here’s how to know if you are – and how to avoid it

COVID devices in-demand, what are they and why are they so popular?

This At-Home COVID Test Might Be Best at Detecting Omicron