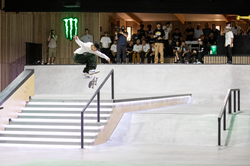 “SLS set the gold standard for professional street skateboarding and pioneered the format for our sport’s Olympic debut.” – Joe Carr

“SLS is once again bringing the most talented skaters in the world together for the 2021 SLS Championship Tour. We are so thrilled to welcome fans in Salt Lake City, Miami and Jacksonville for three unforgettable weekends of elite skateboarding and authentic skate culture,” said Joe Carr, CEO of Thrill One Sports and Entertainment, SLS’ parent company.

The SLS Tour Qualifier provided an opportunity for the most relevant and exciting skateboarders to compete in an official SLS-scoring format. Invited riders hailed from Belgium, Brazil, Canada, Colombia, Japan, and the United States. When all was said and done, the following three riders earned the top three spots and qualified into the 2021 SLS Championship Tour season:

As the youngest competitor in the SLS Tour Qualifier, Monster Army’s Filipe Mota finished right off the podium in fourth place. After earning his way into the final through the grueling Prelims, then making the cut to the Final 4, the 14-year-old from Brazil put down a perfect line including heelflip frontside boardslide the rail, kickflip the pyramid, backside Smith grind the kicker rail, kickflip backside tailslide the Hubba, heelflip the Euro Gap, and bigspin frontside boardslide the rail for 8.0 points. In Best Trick, Mota put down a perfect kickflip backside tailslide shove-it on the Hubba (8.2 points) and bigspin frontside bluntslide the rail (8.2 points) for a 24.4-point total score.

Missed the live stream on Saturday? No worries! Fans can go online now and watch the videos featuring all the action from Saturday’s SLS Tour Qualifier event. The television showcase was produced by Thrill One Sports and Entertainment, the world’s largest independent action sports company. The full-length videos are now available to watch for free on YouTube, including the prelims and finals.

Next up, the SLS Championship Tour: Miami will continue the series at the SkateBird facility in Miami, Florida, from October 29-30. The SLS tour stop will mark the first major event on the recently opened, SLS-certified street plaza. For the grand finale, the SLS Super Crown World Championship weekend will crown the 2021 men’s and women’s world champions at Jacksonville Landing, Florida from November 13-14.

“SLS set the gold standard for professional street skateboarding and pioneered the format for our sport’s Olympic debut. Now, we are continuing to raise the bar and drive towards the next era of skateboarding with the 2021 SLS Championship Tour, culminating with a spectacular finale at the Jacksonville Landing,” said Carr, CEO of Thrill One Sports and Entertainment.

Based in Corona, California, Monster Energy is the leading marketer of energy drinks and alternative beverages. Refusing to acknowledge the traditional, Monster Energy supports the scene and sport. Whether motocross, off-road, NASCAR, MMA, BMX, surf, snowboard, ski, skateboard, or the rock and roll lifestyle, Monster Energy is a brand that believes in authenticity and the core of what its sports, athletes and musicians represent. More than a drink, it’s the way of life lived by athletes, sports, bands, believers, and fans. See more about Monster Energy including all of its drinks at http://www.monsterenergy.com.

Since its inception in 2010, Street League Skateboarding (SLS) has propelled street skateboarding from a collection of independent standalone events to a renowned global series. As pioneers of street skateboarding’s premium qualification system and competition format, SLS offers an amateur-to-professional pathway and creates thrilling live events across the globe. The SLS Championship Tour is recognized as the world’s premier professional street skateboarding competition. Events take place on custom-built, one-of-a-kind, SLS-certified plazas in major cities around the world, with the best in the sport competing for the highest stakes. For more information, visit http://www.streetleague.com.

Street League Skateboarding is now part of Thrill One Sports & Entertainment. Thrill One is a next-generation content company that lives at the nexus of sports, entertainment and lifestyle, combining the resources of Nitro Circus, SLS, Nitro Rallycross and Thrill One Media. A multi-media platform founded in 2020, Thrill One is dedicated to creating mind-blowing action sports events and original content, fueled by the most daring athletes, talent, and brands in thrill-based entertainment. It also boasts one of the largest aggregate social audience in action sports, with over 40 million followers across its multiple brand pages and channels. Go to thrillone.com for additional information.

Paleo diet: how to lose weight, gain health and define your...

Are you tired of trying regimes that require the greatest sacrifice and don't really make you lose weight ? Then you need to know the Paleo Diet. Millions...

Enjoy Hola is proud to present its brand new image and...