Sometimes, while camping, picnicking, or pulling a double-shift, a travel mug just doesn’t cut it. That’s when you need a larger, sturdier thermos to keep hot drinks hot and cold drinks cold for 8, 12, and even 24-plus hours.

Like travel mugs, thermoses use vacuum-insulated technology (and were originally popularized by the Thermos brand). Basically, it’s a bottle within a bottle that has a vacuum between its two walls. And because this vacuum contains no air, it doesn’t conduct heat, which allows the contents inside of the bottle to stay the same temperature longer. This double walled-vacuum design also prevents condensation from forming on the outside of the bottle and allows the bottle to stay cool-to-the-touch, even when full of something piping hot.

Now that we’ve covered why a thermos is great (and how it works), let’s talk about the best ones to buy. For this review, I tested 9 thermoses, running them through temperature, durability, usability, and cleanup tests.

The Winners, At a Glance 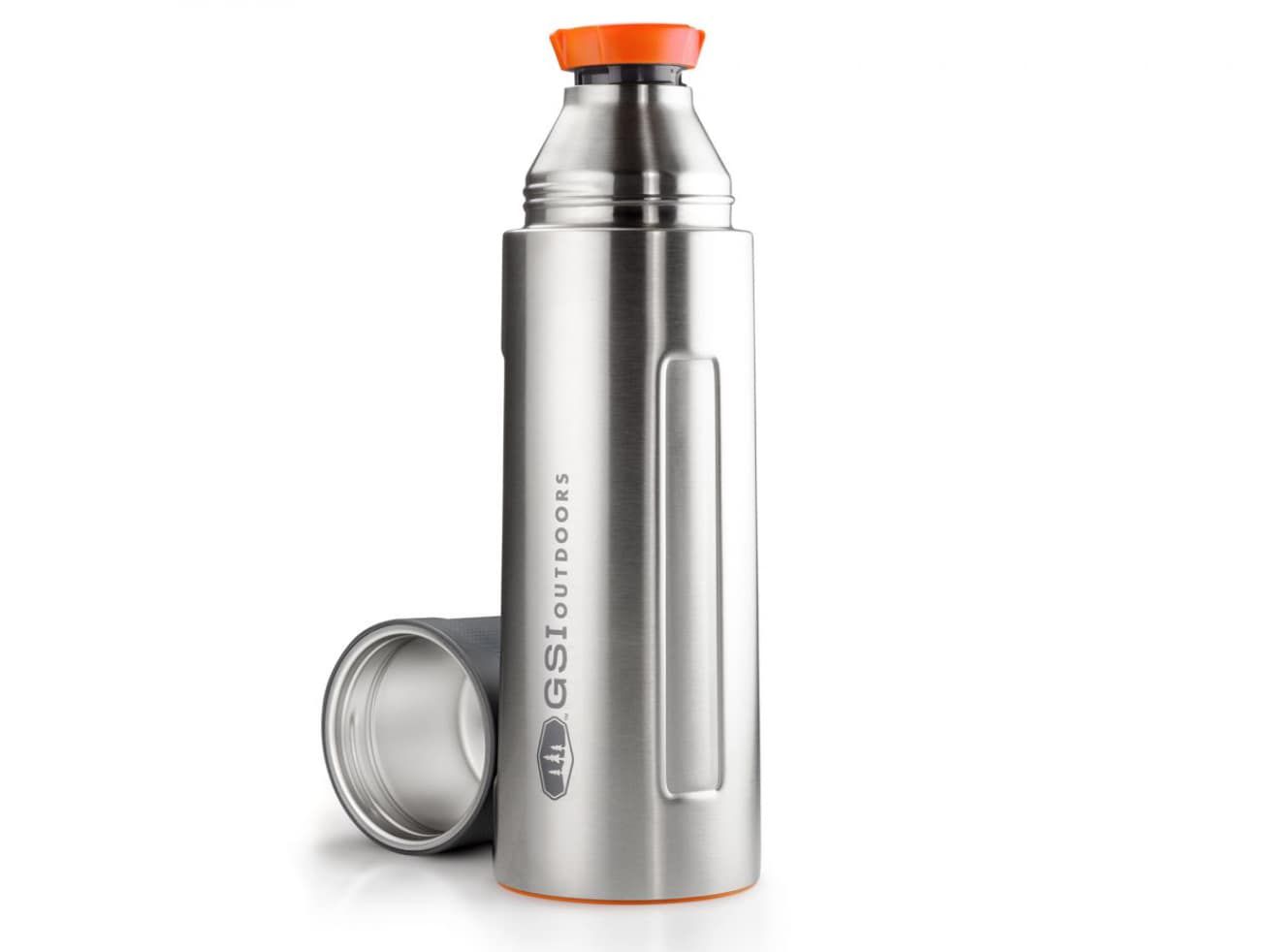 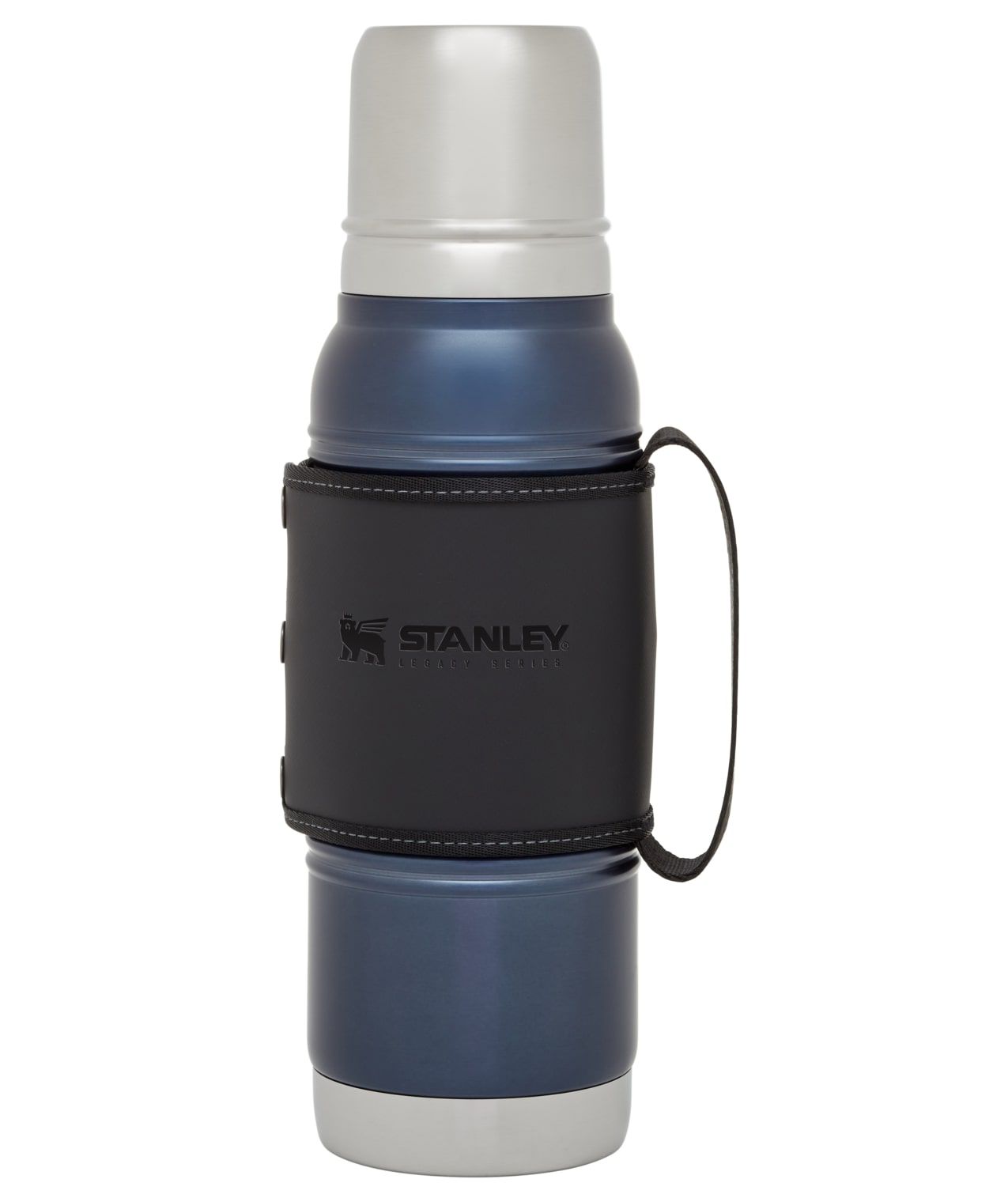 Sleek and sturdy, the GSI Outdoors Glacier Stainless 1 L Vacuum Bottle kept hot drinks hot and cold drinks cold. A high scorer on all tests, it has a non-slip base and grooves on the outside of the bottle that make it easy to grip.

We also loved the Stanley Quadvac Thermal Bottle. This bottle had excellent hot and cold retention and has a removable handle wrap that makes it a cinch to carry.

The Best Thermos For Everyday Use: Zojirushi Stainless Bottle SJ-JS10 and SJ-TG08/10 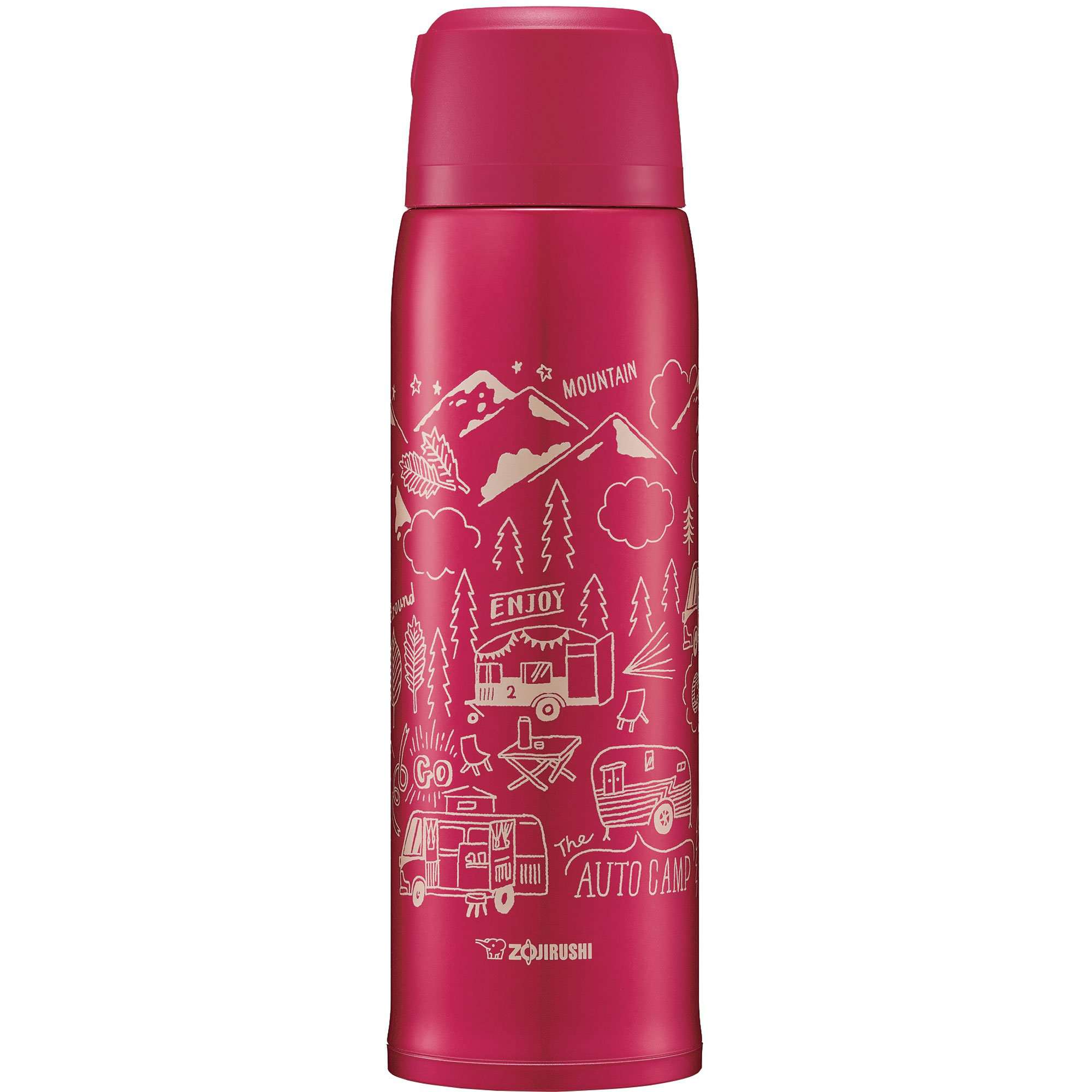 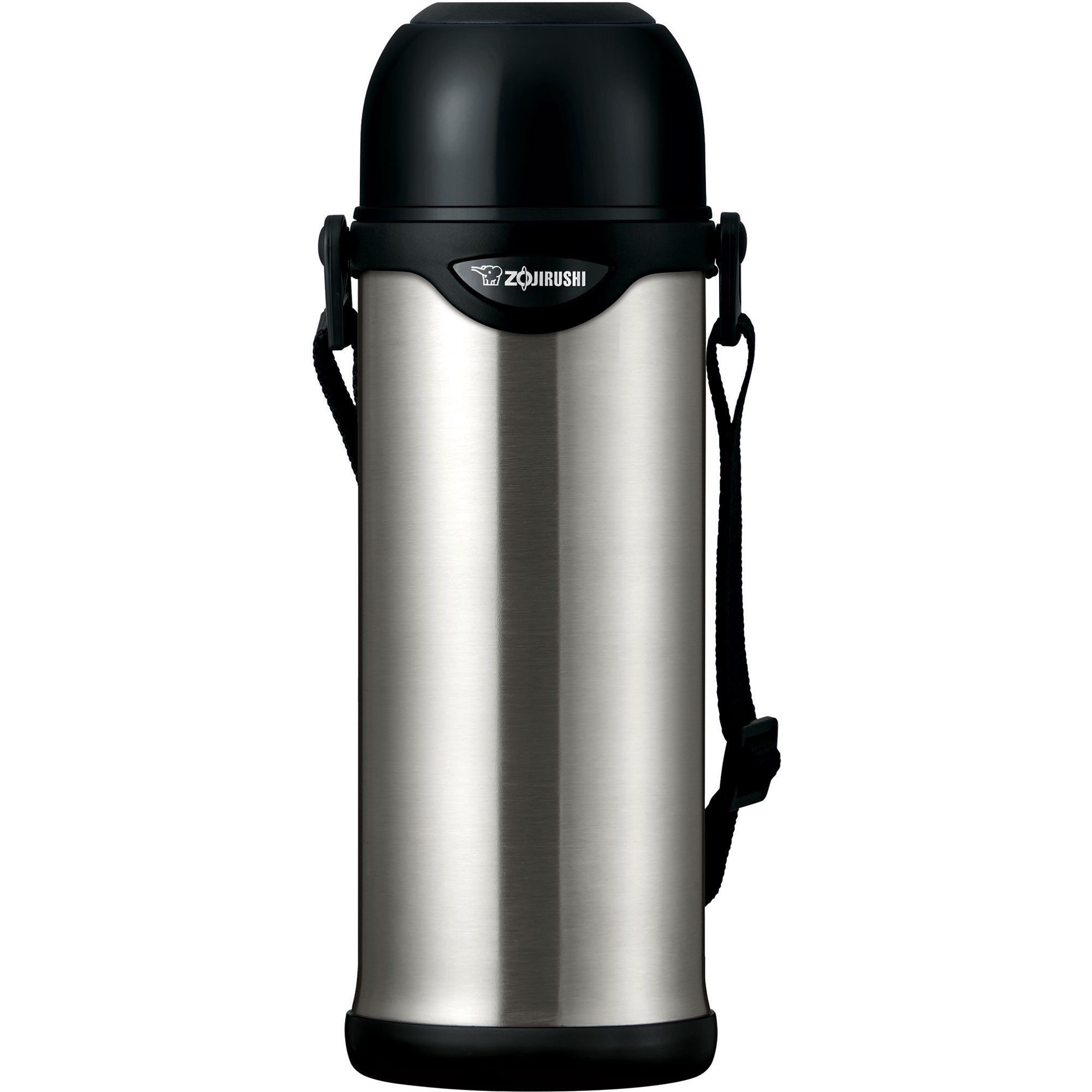 If you want a smaller daily thermos that melds both form and function, both the Zojirushi Stainless Bottle SJ-JS10 and SJ-TG08-/10 are excellent options. The former has cute illustrations on the exterior of the bottle, while the latter is available in a 27- and 34-ounce sizes and features an adjustable carrying strap.

The Criteria: What We Look For in A Thermos

A thermos is a vacuum insulated bottle that keeps liquids hot or cold for an extended period of time. Unlike a travel mug (which you drink out of), thermoses usually feature a lid that you remove and pour liquid from the thermos into, so it doubles as a cup. And while travel mugs have, on average, a 16-ounce capacity, thermoses are much bigger. The thermoses we tested were anywhere from 32 to 42 ounces, which is about 1 liter large.

What Makes a Good Thermos?

A good thermos should have excellent hot and cold retention. It should never leak and be convenient to use and carry and easy to clean, not retaining residual flavors or odors from drink-to-drink. A great thermos should also be able to take a bit of a beating, whether it’s tossed around in a backpack or dropped while at a campsite. Plus, if it looks nice, that’s all the better.

How We Picked the Products in the Review

When setting out to find the best thermoses, we started out by looking at the offerings from recognizable brands (Zojirushi, Thermos, Stanley). We also looked at highest rated thermoses sold on Amazon, as well as speciality retailers like REI. We made sure to review what other experts have said about thermoses, examining sites like Wirecutter and Popular Mechanics.

Whether or not a thermos is dishwasher-safe varies from model-to-model. One of our favorite thermoses, this model from Stanley, notes it’s dishwasher-safe. However, a lot of manufacturers do not state whether or not their thermoses are safe to clean in the dishwasher. When in doubt, hand-washing a thermos is always the best bet (with travel mugs, cleaning it in the dishwasher can actually result in water getting in between the layers of insulation, thus damaging it).

What’s the difference between a thermos and a travel mug?

Which thermos stays hot the longest?

After our tests, the Zojirushi SJ-JS10 had the best heat retention, with the Stanley Legacy Quadvac Thermal Bottle and GSI Outdoors Glacier Stainless 1 L Vacuum Bottle not far behind it.

Which thermos stays cold the longest?

Why You Should Trust Us

I’ve been an expert user of thermoses since grade school, beginning with my very first Planet of the Apes lunchbox. But seriously, as an avid home cook and someone who has written professionally about food for over two decades—plus as a co-owner of a private event space centered around a kitchen—I take great care in assessing each and every piece of equipment I purchase and use (thermoses included).

I’ve spent more time with these nine thermoses than with my family recently, examining the bottles’ hot and cold retention, seals, durability, and how easy they were to clean and use.

I filled each bottle with 36°F ice water (four degrees shy of water’s freezing temperature) and noted the temperature with a calibrated instant-read thermometer. I checked the temperature every 30 minutes for 6 hours and then left the bottles overnight before temping them again every hour the next day until the water reached 60°F—eight degrees shy of room temperature. I noted any models that warmed up quickly.

I ran two heat retention tests. For the first, I filled each bottle with boiling (212°F) water, then tested the temperature with a calibrated instant-read thermometer every 30 minutes for 7 hours before leaving the bottles overnight and testing them again every hour the next day until the temperature fell to 140°F (which, granted, is still very hot). During the first test, I laid the bottles on their sides on a towel to test for leaks. For the second heat retention test, I filled each bottle with 184°F coffee, then left the filled thermoses for 18 hours. I wanted to see how the bottles would perform without constant opening and closing.

Unlike the heat retention tests, the leaking test was rather inconsequential—with the exception of one model. The Otterbox thermos leaked immediately and, when I removed and put the top back on it to make sure it was screwed on correctly, its top popped off the bottle, sending scalding hot water all over the towel and onto the floor.

After leaving the coffee to sit in the bottles, I placed those that were dishwasher-safe in the dishwasher and hand-washed those that were not. All dishwasher-safe bottles emerged unscathed and all hand-washed bottles were easy to clean, especially when using a bottle brush. After washing, I noted if there was any residual stains inside the bottle and/or on its parts. None of the bottles stained nor had any noticeable odors or flavors, however, the removable parts of all of the models—the stoppers and lids in particular—did have a residual coffee odors, which was remedied by soaking the parts in hot soapy water for an hour and then rinsing.

Test 4: How Easy The Thermoses Are to Use

The biggest question when using a thermos is, first and foremost, if they’re easy to pour and drink from. The best models were not too heavy and were easy to lift, pour from, and hold onto. They also had deep cups that were comfortable to hold and drink from.

I also looked at whether the thermoses had any helpful accessories, like a carrying strap, a non-slip base, or grooves on the sides of the bottle that provided extra grip.

To test durability, I filled up each thermos, sealed them, then dropped them from five feet onto the floor at three different angles so that the thermoses would hit the ground on their top, bottom, and side. After the tests, I examined all the models for dents, dings, scratches, leaks, crack. All received minor scratches and dents, but two models dented horribly and began to leak.

This model from GSI Outdoors is super sturdy, sleekly designed, and easy to carry and use. It had excellent cold and heat retention, too. Though the manufacturer recommends that it be “primed,” which means filling it with cold water and letting it stand for 5 minutes before cold use, I didn’t find this to be necessary when testing. It was easy to pour from and had a deep cup that was great to hold and drink from. The grooves on the outside of this thermos made it easy to grip, it had a non-slip base, and it suffered minimal damage after being repeatedly dropped. Plus, it comes in five colors and has a lifetime warranty.

This thermal bottle had a handy (pun intended) removable carrying sleeve, sturdy design, and deep cup that was great to drink from. It had excellent heat and cold retention, too. And while it was the heaviest of the bunch at 1 pound 14.4 ounces, making it a touch harder to pour from, it was still easy to carry thanks to its handle. It’s available three colors and is dishwasher-safe, for those that find that to be a dealbreaker.

The Best Thermos For Everyday Use: Zojirushi Stainless Bottle SJ-JS10 and SJ-TG08/10

Well-designed, this thermos seemed smaller than the competition. However, it still held a liter of liquid despite also being one of the lightest weight models. It excelled heat and cold retention, too, but particularly at the former where it was at the the top of the pack. It had a unique push-button spout top that works well for pouring and come with fairly deep cup that’s comfortable to drink from. While it’s not dishwasher-safe, this thermos is incredibly sturdy and incurred the least damage after being repeatedly dropped. It comes with a 5-year warranty as well.

The Zojirushi SJ-TG08/10 performed excellently, too. Like the other Zojirushi model, it was smaller and lighter weight than other models, but still had a sizable capacity (it comes in a 27-ounce size as well, for those looking for a smaller thermos). It didn’t perform as well as the above models in the heat retention tests (it still did admirably), but excelled at cold retention. It was incredibly durable and, like the other Zojirushi model, sustained little damage after being repeatedly dropped. It was easy to pour from and came with a cup that satisfyingly “snaps” into place when secured onto the thermos. It had a handy adjustable carrying strap and comes with a 5-year warranty.

Is Coconut Sugar Really A Healthy Sweetener? Nutritionists Break It Down

The Best Teas To Sip At The End Of A Stressful Day, Expert-Approved

These Are the Potential Benefits of Sleeping Naked

Packline Materials Handling Announces The Production Of Their New…