Ahh, the arrival of summer…time for dining al fresco in the backyard, swimming in the neighbor’s pool, and putting cucumbers on the menu. Cucumis sativus, better known as the cucumber, is an oft-overlooked ingredient that can be used to invigorate cuisine when you’re lacking inspiration. Commonly referred to as a vegetable, the cucumber is actually classified as a botanical berry or fruit. These cool gourds have quite a range of uses, from being a nutritious ingredient on the menu to soothing under-eye puffiness! 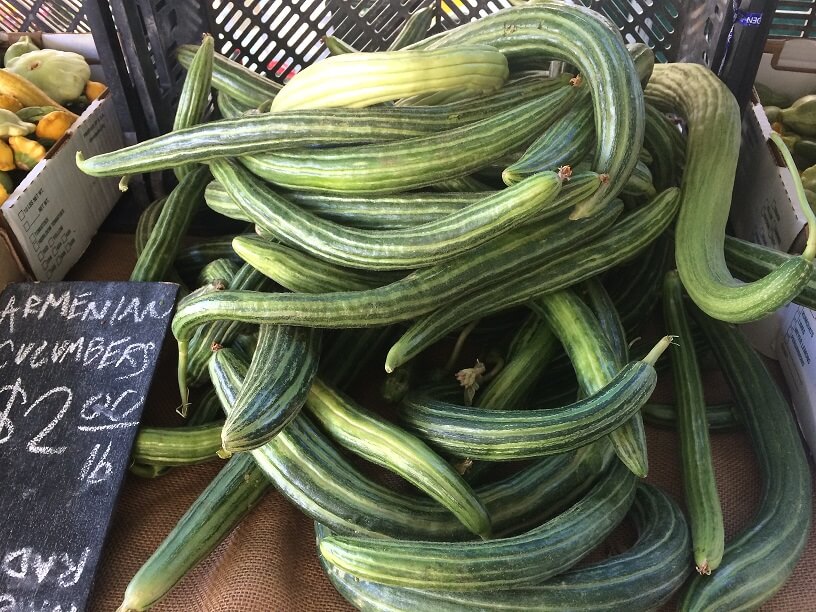 Originating in India, documentation of cucumbers as a part of the diet has been noted as early as the third century AD by ancient Romans and Greeks. In fact, Roman Emperor Tiberius was known for having cucumbers on his plate year round, going to extreme lengths to keep the seasonal vegetable blooming. Some of the different varieties of cucumber include English, gherkin, or Persian.

Though they are composed of 95% water, one cucumber contains almost 450 mg of potassium and 315 IUs of vitamin A, plus trace amounts of other minerals and vitamins—all with very few calories, and low carbohydrate and fat content. With its crunchy, cool texture and unique nutritional profile, cucumbers can play a versatile role in many different recipes! Get excited about cucumbers today with my Top 5 Ways to Use Cucumbers.

Top 5 Ways to Use Cucumbers

1. Add a Cool Crunch to Salads. The fresh, crisp cucumber holds up well with leafy greens, herbs, and tomatoes. Chop cucumbers into almost any salad for an extra pop of crunch!

2. Pickle ‘Em! Since the cucumber has such a high percentage of water, it easily picks up flavors from pickling or marinating. Making simple cucumber pickles in vinegar is an easy way to enter the picking world. You can also buy a variety of pickled or fermented cucumbers to keep on hand as side dishes to main meals to clear the palette. Or as additions to perk up a sandwich, veggie burger, or grain bowl.

3. Blend Them Up! Try a less traditional take on the cucumber, and use them in cool, creamy concoctions, such as cream soups and smoothies. Blended with ingredients like avocado or carrot, the cucumber can add a delicate flavor while keeping it cool. Try this Cold Cucumber Avocado Soup recipe to enliven your taste buds!

4. Float Them in Beverages. Think beyond the salad and include cucumbers in your favorite beverages, such as teas, mocktails, infused waters, and cocktails. Add slices to sparkling water or juice to create a simple spa water, or make it fancy with a cooler like this Iced Green Tea with Lemon and Cucumber.

5. Cucumbers as a Condiment. Why not!? Chopped cucumbers mixed with plant-based yogurt to make a delicious Mediterranean-style relish, which can be served as a side with sandwiches, as a topping for veggie dogs, or used as a dip with chips or veggies.

Having a hard time finding an imaginative use for cucumbers? Try my Easy Gazpacho recipe and video for inspiration. It’s quick and cooling, which makes it perfect for the summer!

Learn how to make the most of other plant foods with the following how to guides:

For more cucumber recipes, check out some of these plant-based favorites:

Carbs In Butter: Is Butter Keto?

Air Fryer Brownies | How To Make Brownies In Your Air...