Wondering what to do with that lumpy, bumpy vegetable called jicama? It may be a more uncommon vegetable, but there are plenty of reasons to try this edible Mexican root! The jicama root has many names, including Mexican potato, Chinese potato, sweet turnip, and yam bean. It was originally grown in Mexico, but is now grown across the world, and has been discovered at archaeological sites in Peru that date back to 3000 BC! The most common species is called Pachyrhizus erosus—certainly a mouthful! The two varieties of this species differ in the consistency of the juice they produce: the first, named jicama de leche, produces milky juice, and the more popular one, called jicama de agua, has a more watery and translucent juice.

Amazingly, the jicama vine can grow to a height of 13-20 feet, and the jicama root can weigh a similarly impressive forty-five pounds. Most of this weight is water, as it is 86-90% water and contains only small amounts of protein and fat. A 100-gram serving only has 38 calories, less than an equal amount of apple or potato, which it is commonly compared to. This root is very high in vitamin C, providing nearly a quarter of the daily recommended value, and also contains the prebiotic inulin. Prebiotics are important components of the diet and provide a food source for gut bacteria, whereas probiotics contain living microorganisms. For more information about probiotics, including how to incorporate them into your diet, check out this article. 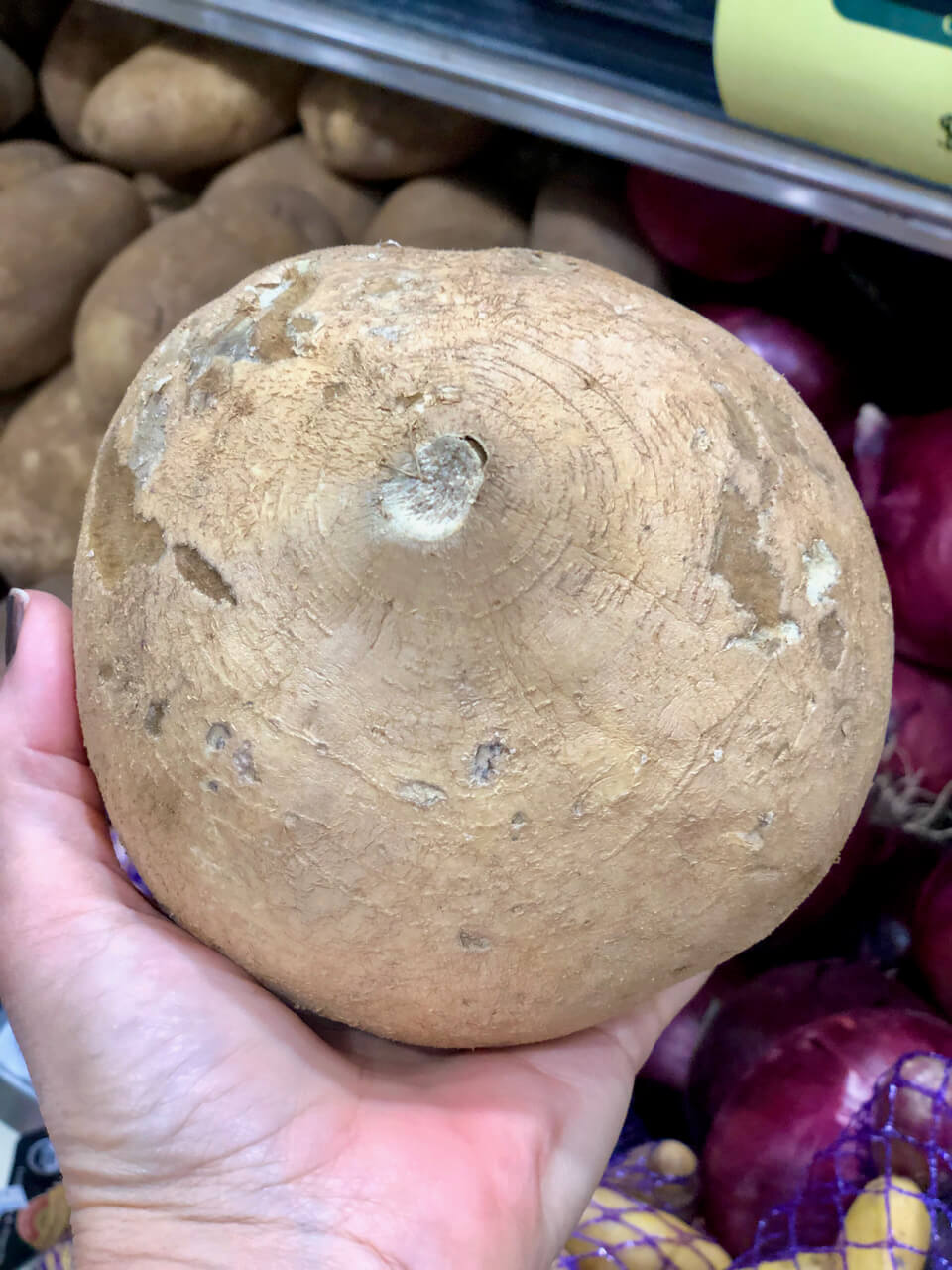 The outer layer of the jicama root is rough and papery, but the inside is juicy and crunchy, and can be likened to a raw potato, pear, or apple. Only the inside of the root should be eaten, as the leaves, seeds, and flowers are all toxic, though these are removed before selling. Although the flavor is described as slightly sweet, a 100-gram serving only has 1.8 grams of naturally-occurring sugar, making it a good option for anyone looking for a low-sugar, healthy snack! For other tips on how to lower added sugars in your diet, check out this post.

Top 5 Ways to Use Jicama

So, how can you enjoy this versatile root? Here are the top five ways to use jicama:

1. Eat them raw. There’s no need to get fancy when raw jicama has a perfectly sweet flavor all on its own. Try dressing it up with a bit of rice vinegar and salt—this combination is eaten in the Philippines—or add lemon juice and chili powder for a spicy snack. Or add it to a beautiful veggie platter.

2. Mix it into your fruity salad bowl! With a sweet, apple-like flavor that isn’t too overpowering, jicama makes a great addition to a salad. Slice it thinly and add to a bowl with orange cubes, apple slices, and watermelon, or any in-season fruits. For a quick and tasty dish, take a look at this salad!

3. Add it to a veggie dish. Jicama can also take on a savory role in a meal. Slice it thinly and mix with other crunchy, light vegetables like carrots and kale for a tasty, fresh salad that can be eaten with any meal. Or, try this salad that’s dressed with a tangy lemon vinaigrette and is perfect for cooler weather.

4. Roast it! Jicama make a great low-carbohydrate alternative to potatoes, so try slicing them into long rectangles and baking or roasting until crispy. Add spices to taste, such as salt and pepper for a French-fry replacement, and serve alongside a veggie burger. Or, slice into thin circles with a mandolin for a healthier chip option and serve with one of these tasty summer dips!

5. Mix into a stir-fry. Try marinating it in soy sauce or another flavorful sauce before tossing it into your stir-fry. The natural texture of the jicama root is similar to water chestnuts, though the two plants have little in common. Check out this stir-fry recipes for a tasty idea, or make your own unique creation!

For other guides on how to use plant foods, check out these:

The Center Foundation Presents “Lean on Us” as 2021 Virtual…