Michael Lock was diagnosed with Parkinson’s disease nearly two decades ago. It was a gradual progression that the Crown Point, Indiana resident was able to keep at bay by taking a medley of medications, but his condition started to worsen over the past five years.

The disease began to rob him of his mobility as time went on. His cocktail of pills — Rytary, Amantadine and Sinemet — were only effective for a short interval during the day, forcing him to depend on a walker the rest of the time. Once his condition progressed further, it became hard for him to stand up or walk.

“I couldn’t pick up my grandkids because I was afraid that I was going to fall over. They’d come up to me and say, ‘Hey, Grandpa, give me a hug!’ but I couldn’t do it. It was very difficult,” Lock, 64, says. “I realized this isn’t the way I want to live.”

Years earlier, his doctor had recommended deep brain stimulation, a surgical procedure in which one or more electrodes are implanted into the brain to treat symptoms of chronic, neurologic conditions using electrical energy.

“Like anybody, I was afraid. My first thought was, ‘Hey, nobody’s going to drill a hole in my head and stick something in there!’ ” he says. “But I was at the point where it was worth whatever risk there was.”

In August 2018, a surgical team at Northwestern Memorial Hospital in Chicago rolled Lock into the operating room, where neurosurgeon Joshua Rosenow peeled back part of Lock’s scalp — revealing the bony, off-white surface of his skull — and began drilling a small hole into the left side. Using state-of-the-art brain imaging scanners to guide the exact location of the target, Rosenow inserted a 1.25-millimeter-wide electrode into the thalamus, the part of the brain that, among other things, relays motor and sensory signals. The following month, Rosenow repeated the same procedure on the right side of Lock’s brain.

Two months later, with two electrodes nestled deep in his thalamus, Lock returned to the hospital to have his brain “programmed.” Rosenow and the neurology team fine-tuned the settings on the device to make sure the electrical signals were stimulating the correct places in the brain and at the precise voltage.

“He walked [into the hospital] with the walker, he walked out without the walker, and we haven’t used it since,” Lock’s wife, Marcia, says. “It was the best decision he ever made.”

What Is Deep Brain Stimulation?

Lock’s case sounds like science fiction, but at this point it is far from unheard-of. Deep brain stimulation (DBS) is a growing field in neurosurgery that has given hope to people with debilitating conditions.

The implantation of electrodes in the brain has been used by clinicians since the 1930s, most notably by neurosurgeon Wilder Penfield, who initially used this method to treat patients with epilepsy. By 1987, a neurosurgical team in Grenoble, France, developed the modern-day version of DBS as an effective way to treat essential tremor and Parkinson’s disease. According to a 2019 paper published Nature, more than 160,000 patients from all over the world have benefited from DBS to treat a variety of conditions. 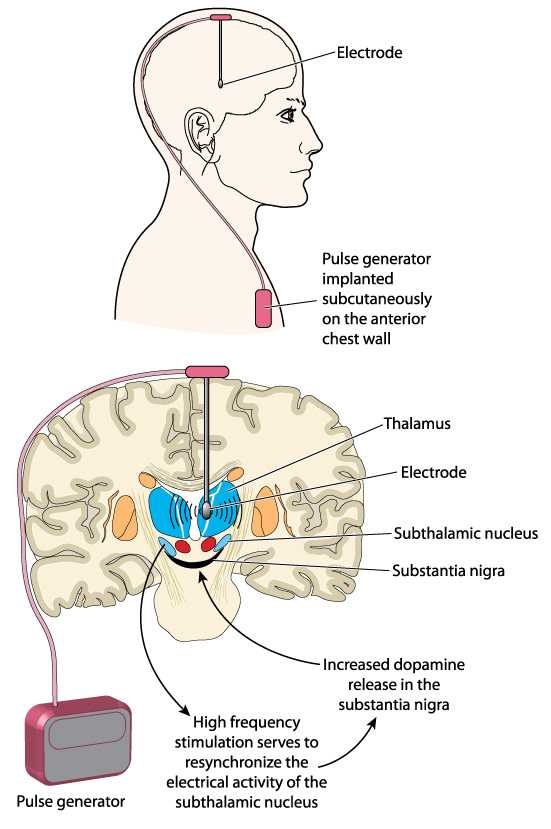 Currently, DBS is approved by the U.S. Food and Drug Administration to treat patients with movement disorders, including Parkinson’s disease, essential tremor and epilepsy. The FDA sanctioned the use of deep brain stimulation for refractory obsessive-compulsive disorder and dystonia under the Humanitarian Device Exemption. However, scientists believe that tapping into the brain could treat a wide variety of conditions and are continuing to explore DBS as a possible therapy for a range of conditions, including certain types of depression, chronic pain, Tourette syndrome and Alzheimer’s disease.

While experts are still uncertain about how exactly DBS affects the neural network, the prevailing theory is that the procedure causes what’s called an informational lesion: The networks in the brain are communicating with bad information, which causes the neurological dysfunction, but DBS delivers a constant stream of electrical impulses — between two to four milliamps — to drown out the bad information with white noise.

Next Step: Talking to the Brain

Because the brain is an electrical organ that uses a symphony of electrical currents to communicate with itself and the body, the next phase of DBS’ evolution is to use the electrical impulses to essentially “talk” to the brain in its own language. “We’re not talking to the brain in a smart way yet,” Rosenow says. “We’re trying to be smart about where we talk to the brain, but we’re not using smart patterns of stimulation yet.”

Earlier this year, Medtronic — one of the three major DBS device manufacturers in the world — released the Percept PC Neurostimulator, a first-of-its-kind DBS device that can monitor and track brain signals. “Unlike other pulse generators that have been used for DBS over the past 30 years, [this device] has the ability to sense and record the brain waves that are occurring right around the electrodes in the brain,” says Albert Fenoy, a neurosurgeon at Memorial Hermann Hospital in Houston, who was the first to implant the device in Texas. The ability to record brain activity is a major milestone that will undoubtedly push the field of DBS even further into the future of smart devices.

“If it can record this information at a specific threshold, then it has the ability to stimulate when those brain signals are aberrant to stop that [dysfunction] and, therefore, improve the symptomology,” Fenoy says. “We can dial in at a specific threshold of parameters when this device will be stimulating. It’s not continuously on because the brain signals may not be continuously aberrant.”

Granted, these types of responsive devices already exist for epilepsy. When such devices detect unusual or abnormal signals in certain areas of the brain, they deliver a small electrical current to stop the epileptic seizure before it happens, but neuroscientists are exploring these responsive neurostimulators for Parkinson’s disease, essential tremor and other conditions.

But DBS — as with many other scientific discoveries and technological advancements before it — is not without its concerns.

“Like any technology, it can be used for ill,” says Philip Starr, a neurosurgeon at University of California San Francisco Health. “There are privacy considerations. With a sensing device, can someone hack into your brain device and read brain signals? Eventually, there will probably be a way in which your brain signals can identify you, the way a retinal scan or a fingerprint identifies you.”

Starr reassures the public that the ethical questions and implications raised by the advancements in this field are important factors in how federal agencies fund neuroscience research. For example, the National Institutes of Health’s BRAIN Initiative, established in 2013, created a neuroethics division to work closely with researchers and to establish a set of ethical tenets that address the novel uses of neurostimulation and other techniques.

“We and many others are partnered with neuroethicists who are studying our patients, caregivers and clinicians to try to define, what are the ethical considerations with these devices that can change emotional state and can in principle change how you think?” Starr says. “How are we to think about the use of these devices, eventually for people who don’t have a brain disease, but just want to have improved function? Is that going to happen?”

For the time being, DBS can’t control people’s thoughts or change their emotions. It is, however, a safe and effective way to alter brain function to relieve the burden of suffering from neurological conditions, such as Parkinson’s disease. Michael Lock is living proof of that. Two years after Lock underwent the life-changing procedure, he and his wife are still happy that he took the risk to have electrodes implanted in his brain.

“It was the best move I’ve made in my life,” Lock says.

Since his surgery, Lock has regained the quality of life Parkinson’s stole from him years ago, and no longer takes medication or uses his walker.

“When his Parkinson’s started to progress, he didn’t show much emotion. He was very stoic and didn’t laugh. All of a sudden, he became the Mike I knew 45 years ago,” wife Marcia says. “I got my Mike back.”

Add These Anti-Inflammatory Ingredients To Your Grocery Basket, Stat

You’re Going to Need to Work on Your Balance

Need More Energy? A Nutritionist Shares the Best Vitamins to Give You a Boost

Denise Austin and Katie Austin launch their EVER BETTER™ Protein Bites! Each bite is keto friendly, gluten free, and low in sugar....

46 Stylish Sunglasses for the Summer—Under $100